Stop and think again, towards equality in police PACE stop and search 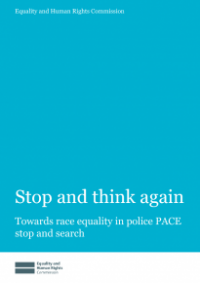 In March 2010 the Equality and Human Rights Commission published Stop and think which showed that the police in England and Wales conducted about a million stops and searches of members of the public every year, the great majority under the Police and Criminal Evidence Act 1984 (PACE) and similar laws requiring officers to have ‘reasonable grounds for suspicion’. The power has always been controversial, and when Stop and think was published, Asian people were stopped and searched about twice as often as white people, and black people about six times as often. Stop and think also identified geographical differences; for example, little race disproportionality in much of the north of England, and relatively high levels in some southern forces. There were also wide ranges year on year between some neighbouring similar forces, and also between comparable London boroughs. The report
concluded that unless forces could convincingly evidence that their race inequalities were justified their practice would be unlawful and discriminatory.