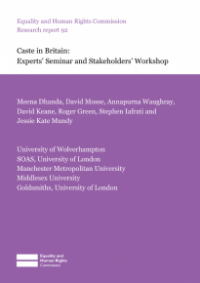 In April 2013, the Enterprise and Regulatory Reform Act was enacted. Section 97 of the Act requires government to introduce a statutory prohibition of caste discrimination into British equality law by making caste an aspect of the protected characteristic of race in the Equality Act 2010. In the context of this direction, the Equality and Human Rights Commission (EHRC) contracted a team of academics drawn from different research institutions to carry out an independent study on caste in Britain.