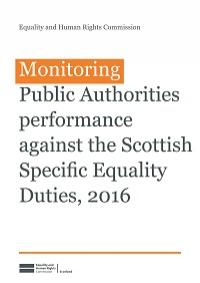 The Public Sector Equality Duty (PSED) is a positive duty on public authorities and others carrying out public functions. It requires that public authorities give proper consideration to equality in their day to day work in shaping policy, delivering services and in their employment practices. The PSED operates in two parts – the General Equality Duty and the Specific Duties.

The Specific Duties are set out in The Equality Act 2010 (Specific Duties) (Scotland) Regulations 2012 as amended. These came into force on 27 May 2012 and are intended to support listed authorities in meeting the three needs of the General Equality Duty.

The 2012 Regulations were amended by the Equality Act 2010 (Specific Duties) (Scotland) Amendment Regulations 2015, which added new bodies to the list of those subject to the duties. These newly listed authorities were required to carry out their duties and publish information for the first time by 30 April 2016. This report relates to how well those bodies met their duties.