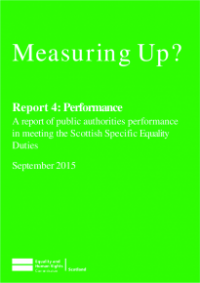 This is the fourth in our series of reports which track the performance of Scottish public bodies against their duties under the Equality Act 2010 (Specific Duties) (Scotland) Regulations 2012.

This report focus on the extent to which 239 listed public bodies were able to report against key equality data and outcomes including:

The report was published in September 2015.