Impact of tax and welfare reforms between 2010 and 2017: interim report 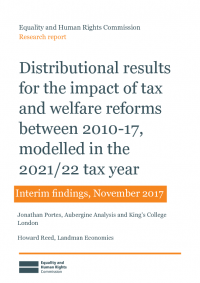 This report is a summary of the first set of results from our research project looking at the effect of tax, welfare, social security and public spending.

It shows the effect of changes to the following parts of the tax and welfare systems:

The work focuses on protected characteristics, as set out in the Equality Act 2010. It also looks at other categories, for example, household income and the type of people living in the household.

We have looked at all of the changes from the 2010 to 2015 Conservative and Liberal Democrat coalition government and the 2015 to 2017 Conservative majority government that can be compared using data from the UK Family Resources Survey (FRS) and Living Costs and Food Survey (LCF).

The Conservative minority administration elected in June 2017 has not yet announced any changes. However, any changes announced in the Budget on 22 November will be included in the final report from this project, due to be published in early 2018.

The research was carried out by Landman Economics and Aubergine Analysis.