The Equality Act 2010: a guide for political parties 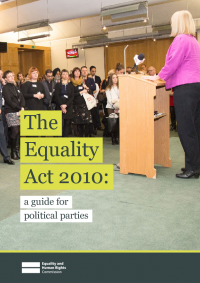 This publication provides an overview of what the Equality Act 2010 means for political parties and their members.

It includes an explanation of the action that can lawfully be taken by parties to increase the participation of under-represented groups in elected office and within their own party structures.

It also explains when and how members of political parties, and people who want to become members, are protected from unlawful discrimination.

The information is for political parties and their members. It will also be of interest to people and organisations who want to see more under-represented groups involved in politics.

The information relates to equality law and political parties in England, Scotland and Wales.