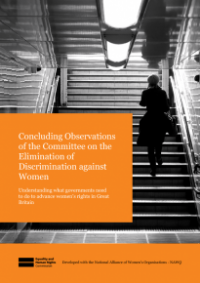 Developed with the National Alliance of Women’s Organisations (NAWO)

CEDAW – the Convention on the Elimination of All Forms of Discrimination Against Women – is the United Nations’ international Bill of Rights for women. It is one of the UN human rights treaties, to secure equality between men and women.

The Commission has produced this document as part of its role in supporting the UN treaty monitoring process and promoting understanding of human rights in Britain. The document is intended to help Parliamentarians and civil society understand what the CEDAW Committee expects the UK Government and devolved administrations to do over the next few years.