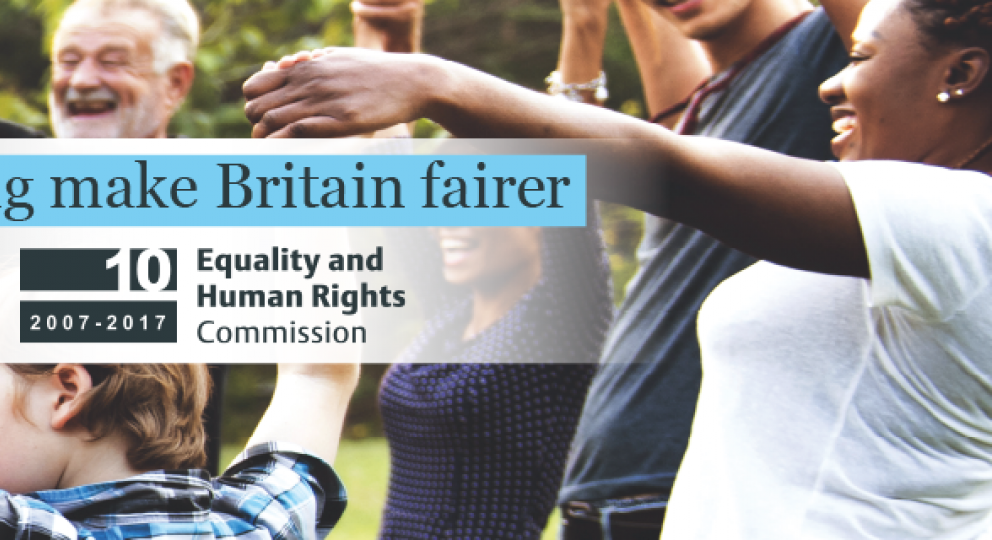 10 years on: the fight is far from over

In October 2007 the Equality and Human Rights Commission was born. Bringing together the Commission for Racial Equality, Disability Rights Commission and Equal Opportunities Commission under one roof, with the additional mandate of the country’s national human rights institution, was not straightforward.

But now, 10 years on, we are not only regarded as the guardian of people’s rights in Great Britain, but also an internationally respected and world-leading body in the field of equality and human rights.

It’s been a decade of hard work, the results of which are now emerging. We’ve taken on hundreds of legal cases, which have made significant contributions to British society. Many have been landmark cases that have had lasting impact – either by changing or clarifying the law, challenging and amending government policy, or altering outdated policies. Amongst other things, these have resulted in hospitals ending the use of ‘do not resuscitate’ orders without consulting patients and families, stopping the police sharing irrelevant information with employers, protecting the right for disabled people to live independently and, recently, helping to end the disastrous regime of employment tribunal fees.

People think that equality and human rights are abstract issues, but the work of the Commission is about real change that makes a difference to the lives of ordinary people. We've made it possible for parents who want flexibility so they can care for their disabled children to be able to work on a part-time basis and for gay couples to get equal treatment in B&Bs. Right now we are taking on a racist house rental policy and supporting a couple denied permission to adopt because of their race.

We’re also proud of our research. Our evidence base is the foundation on which we build our work and the way we collect and analyse equality and human rights information is the envy of countries around the globe. This is particularly true of our 3-yearly agenda-setting ‘Is Britain Fairer?’ report.

Our inquiries and investigations team have dived deep into big issues. They assessed how the Government’s 2010 Spending Review affected equality, they examined how older people’s human rights are breached in home care and they’ve taken an extensive look at why people with mental health conditions die while in detention by the state. This work is fundamental to the development of our legal strategy.

Human rights are for everyone, and we are here to advance them

Yet our work is far from over. Our research shows that race inequality is still entrenched in society, disabled people are still treated as second-class citizens, Islamophobia and anti-Semitism are still worryingly prevalent and the LGBT community is frequently the victim of hate crime. And we should be under no misapprehensions about gender equality. As recent high-profile examples have shown, we still have a lot to do to deliver real equality on this front.

Our role is essential if we are to make Britain a fair and inclusive country. And, despite the naysayers in the popular press, this is not about promoting ‘political correctness’ – the examples I cited above (and important examples like the Hillsborough Inquiry) demonstrate that human rights are for everyone, and we are here to advance them.

Brexit is about to shape the nation's future. The outcome of the referendum is clear, but we are determined that equality and human rights must be at the heart of an independent Britain. We are very clear that when we leave the EU there should be absolutely no diminution in equality and human rights protections in Great Britain. Our role in protecting these rights is vital, and at the moment we have cause to be anxious.

Now, more than ever, the country needs the Commission as its independent guardian of equality and human rights

Holding government to account has always been one of our primary functions and, if we are to ensure that Brexit Britain remains fair and inclusive, we believe that now, more than ever, the country needs the Commission as its independent guardian of equality and human rights. We know the Prime Minister cares passionately about equality and fairness. Making the Commission directly accountable to Parliament rather than government would be an excellent way of demonstrating her commitment.

In 1997 the Labour government gave full independence to the Bank of England. In 2011 the coalition government created the independent Office of Budget Responsibility. Both of these organisations were made independent to give them autonomy and greater credibility to make decisions. By making us accountable to Parliament rather than Ministers, the Prime Minister would remove government’s control of our budget, their involvement in the appointment of our board, and any perceived threat of political interference.

We already have strong legal powers and make the very best use of them. However, the governments and large organisations that we are required to hold to account are also powerful and well-resourced. To tackle those who break the law, I believe we would be even more effective with additional powers.

We want to be able to demand information from organisations we suspect are acting unlawfully, without first having to initiate a formal investigation. We also want the power to enter and inspect premises where disability access requirements are being ignored and to carry out ‘mystery shopping’ to make sure business are complying with the law in a swift, light touch and relatively inexpensive way. To drive real change we should be able to issue enforcement notices or impose a civil sanction, for example where large organisations fail to publish their gender pay gap.

We work very closely with businesses. We know that they like the information and guidance we provide to help them comply with the law and establish best practice. But we also know that many organisations have difficulty in understanding precisely what is required of them. I am keen that we do everything that we can to make these requirements clearer.

If the government restored our power to arrange conciliation services, and even went further and enabled us to arrange arbitrations and give binding determinations in some types of cases, I am confident that we could reduce the burden on our courts and keep legal costs down for everyone involved.

We cannot ever stand still

Victims of discrimination and others who need our support must be at the heart of everything we do. As a result, we cannot ever stand still. We must be ambitious to ensure we drive lasting change in society for everyone and in all areas of life. We must be a country where our work places and education system allow everyone the ability to fulfil their potential, where access to dignified health services is provided for us all and where we have the right to an adequate standard of living.

We know that 10 million people are living in poverty. The tragedy at Grenfell was a wakeup call that, even though we find it hard to acknowledge, the least well off do not receive the same level of support in our society. The right to decent housing is a human right and this injustice must be tackled head on. By bringing in the socio-economic duty, a critically important part of the Equality Act not yet implemented, our public services would have to play a greater role in helping the less well off in society, and improve the prospects of those such as white, working-class boys who are being left behind in many areas of life.

I am confident that the Commission is doing more than ever to deliver on its objectives but, at a time of continuing government cuts, I know that we will only ever achieve our ambitious plans by working in partnership with others. I have set out some of the changes that could easily be made to enable the Commission to deliver even more. Throughout the next 12 months we plan to run a series of events to explore these issues, to hear your views and to secure your support. By engaging in this way, I am confident that we can build on the achievements of the last decade to deliver an improved society for us all.