The Marriage (Same Sex Couples) Act 2013: Marriage and the Law 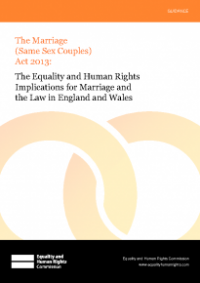 The Marriage (Same Sex Couples) Act 2013 (the Act) extends marriage to same sex couples in England and Wales. This guide explains the changes introduced by the Act, and how it relates to equality and human rights law. It complements our accompanying guidance on: the workplace and service delivery; the provision of school education; public authorities; and religious organisations. This document is useful for same sex couples, employers, employees, service providers, customers, public authorities and their service users, religious organisations and their officials, as well as schools, their employees, pupils, governors and teachers.

Rights under equality law protect against unlawful discrimination and harassment based on various protected characteristics, including marriage and civil partnership, religion or belief, sexual orientation and gender reassignment. Human rights law also provides protection against discrimination in the enjoyment of certain rights, and protects the rights to freedom of thought, conscience and religion, freedom of assembly and freedom of expression.